Three films about the artwork of Andrew Wood 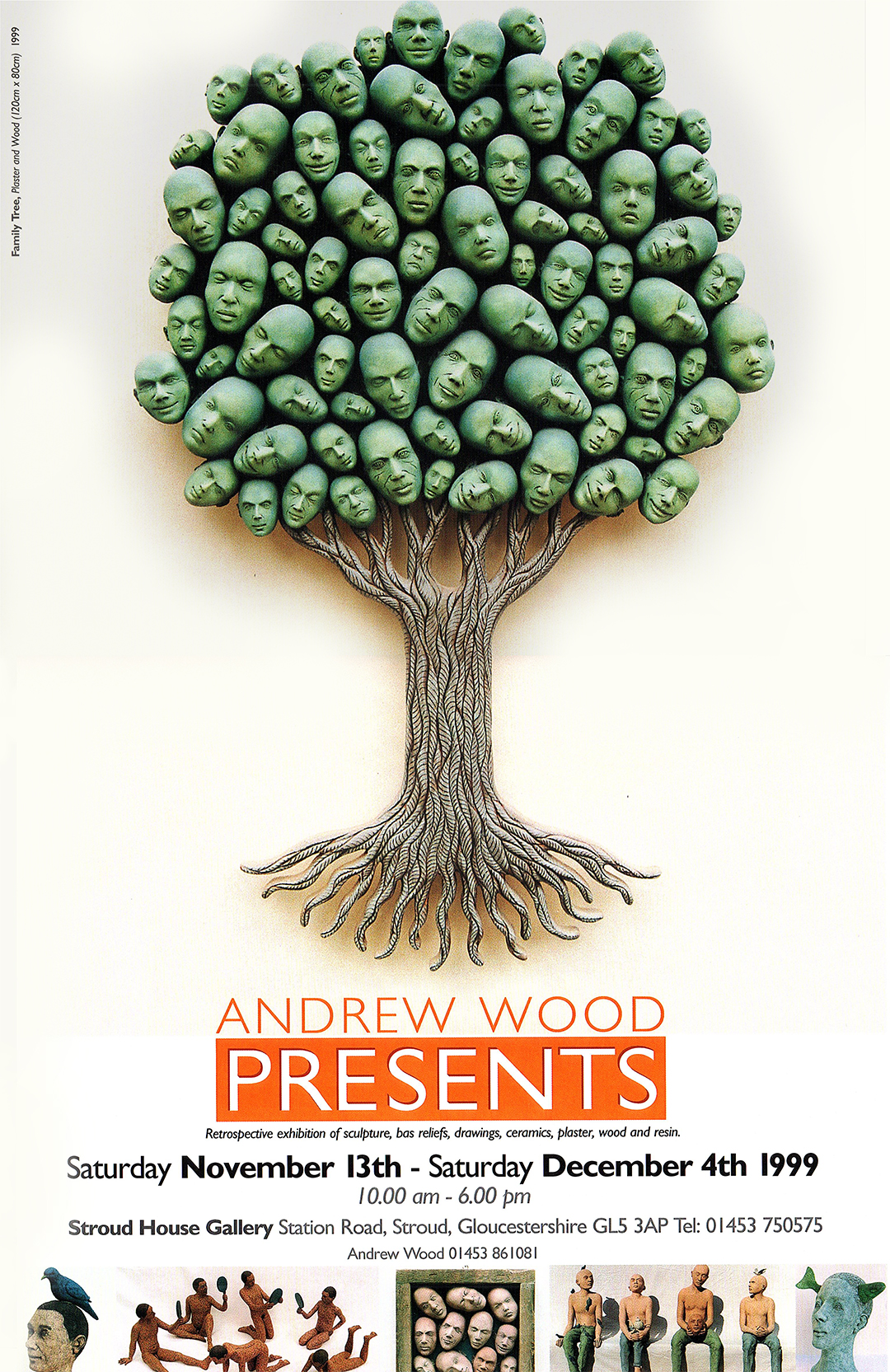 In 1999 Andrew Wood celebrated 30 years as a professional artist by holding a retrospective exhibition of his work. The director of the Stroud House Gallery, a contemporary art gallery in the centre of Stroud, offered the space for this exciting event.The gallery space occupies the ground floor of a large and imposing Victorian commercial building. It is a large, light and generous space with a window shop frontage on two of the four sides. The basement has the same dimensions without windows.
There was a total of 120 pieces including early ceramics from the artist’s student days at Falmouth School of Art and covering all the different phases of his career.

On the last day of the exhibition, filmmaker Pip Heywood arrived with his camera and quietly and unobtrusively walked around, filming the entire exhibition.

The result of that visit is this (13 minute) film, Andrew Wood Presents:

A collaboration between an English artist and an Italian film maker, set in the Cotswold town of Stroud and the Tuscan town of Cortona. The film was conceived spontaneously on the final day of sculpting a statue of the Hindu God Ganesh. The commission came from an Indian restaurant in Peckham called Ganapati, which is another name for Ganesh.

The artist Andrew Wood talks about the techniques involved in converting a bag of clay into a complete sculpture. He describes the techniques of modelling and carving the clay, baking in the kiln and painting with oil paints. He references the traditions of Indian craftsmanship and contemporary crafts.

Diagnosed with Parkinsons Disease 10 years earlier, the film follows the artist as he works. He talks about his life as an artist with a disability, the effect of his disability on his working practice and the inspiration that he receives from dancing and spiritual practice.

Winner of the Stroud Film Festival Award, 2015, this is in no way a sad film, on the contrary, it is a film about joy, the human spirit and a celebration of colour and form. The artist speaks movingly and with gratitude about his life as an artist and how creative energy is the most effective medicine in his medicine chest.

The soundtrack is a recording of a concert at Prema Arts Centre in 1984 with Hariprasad Chaurasia, India’s greatest flute player and Zakir Hussain, the fastest tabla player in the world, with Andrew Wood on tamboura.

The original idea for this film was very simple, to create a catalogue of the artist’s available work, still in the studio.

Photographs have always been the currency of the fine art market. For many years slides were the definitive and essential media. For the last 10 years the artist has been working on a series of wall based abstract relief sculptures known as The Shape of Things to Come. He has become a specialist in the making of ‘bas relief’ sculpture, and is fascinated by the subtleties of creating an illusion of the three dimensional world using limited depth; suggesting a dimension somewhere between two and three. However good the photographs may be, the subtleties and details of the work do not translate. They are easily mistaken for cut out paintings. The brief for this film was to demonstrate the detailed and intricate modelling and colour and the sculptural features of the work.

The film was made by Pip Heywood – a long time friend of the artist and an experienced documentary film maker – who has worked with BBC 2 and Channel 4, among others.

While not entirely abandoning the brief,  Pip followed his instincts and his experienced eyes and ears. He is a great listener and is particularly good at eliciting authenticity from his subjects. The result is a film that is so much more eloquent and informative than a simple catalogue, it is an accurate account not only of the work but also of an artist’s working practice.